The Power of TED* (The Empowerment Dynamic) 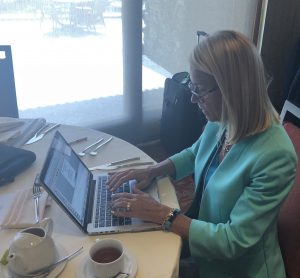 The Power of TED* (*The Empowerment Dynamic)

The Annual Civil Collaborative Law Conference in Las Vegas this year offered us many insightful presentations. One of my favorites was Glenn Meier’s training on The Empowerment Dynamic (“TED*”). TED* offers us, not just a positive approach to life’s challenges, but also a more insightful approach to our collaborative matters, as well.

According to TED*, people tend to engage in a “drama triangle” that hinders us from performing our jobs optimally. Most of us are in constant conflict, and many of us are not even aware of it. This drama impacts not only our client matters, but also our careers and the rest of our lives.

Dr. Stephen Karpman’s Dreaded Drama Triangle examines the connection between personal responsibility and power in conflicts, and the destructive and shifting roles that people can play in those conflicts. He defined three primary roles in any conflict: the Persecutor, the Rescuer (the one up position), and the Victim (the one down position).

Which one are you?

The Victim’s stance is “Poor me!” The Victim feels oppressed, helpless, hopeless, powerless, and ashamed, and is unable to make decisions, to solve problems, to take pleasure in life, or to achieve insight. The Victim, if not being persecuted, will seek out a Persecutor and also a Rescuer, who will save the day but also perpetuate the Victim’s negative feelings about herself.

The Victim’s attention is focused on what she doesn’t want. Her intent is to escape the problem. This results in a roller coaster of episodic and short-term change. The Victim suffers from a Problem Orientation, in which there are perpetual fire drills, tasks remain unaccomplished, she has continuous partial attention, and her vision is vague and difficult to pin down.

This mindset, understandably, leads to exhaustion and burnout.

The Rescuer’s line is “Let me help you.” A classic enabler, the Rescuer feels guilty if she doesn’t rescue. Yet her rescues consistently have a negative impact, disempowering the Victim, keeping her dependent and, indeed, giving her permission to fail!

The reward derived from this role is that it removes the focus from the Rescuer. When she focuses her energy on the Victim, she is able to ignore her own anxiety and issues. The rescue role is also pivotal because the Rescuer’s primary interest is really to avoid her own problems; it is simply disguised as concern for the Victim’s needs.

The Persecutor insists, “It’s all your fault.” The Persecutor is controlling, blaming, critical, oppressive, angry, authoritative, rigid, and superior.

Initially, a drama triangle arises when a person takes on the role of Victim or Persecutor. This person then feels the need to enlist other players into her conflict dynamic. As often happens, a Rescuer is encouraged to enter the situation.

By contrast, the TED* model provides a healthier approach to conflict than the Drama Triangle. By simply altering our perspectives, we can change the conflict dynamic and thereby markedly improve the result. So, rather than Victim, Rescuer, and Perpetrator, TED* encourages a Creator, Coach, and Challenger approach, respectively.

The Creator owns the power to choose and respond. Unlike the Victim, she focuses on outcomes with the mindset, “I can do this. I can achieve this goal.” Her attention is trained on what she does want, rather than on what she does not want. Her intention is to move toward her vision or desired outcome. This results in new and better breakthroughs and sustainable change. The Creator has an Outcome Orientation that is focused on prioritized outcomes. She can see and measure her progress forward. Her attention is on short-term baby steps toward her goal. Her vision is clearly communicated and periodically reviewed. She is inspired, energized, and empowered.

The Coach supports and assists the Creator. She facilitates movement forward and clarity by asking questions like, “How will you accomplish what you want? What is your next step forward? Long term, how will you achieve your goals?”

The Challenger calls for learning and growth from the Creator. She provokes and evokes action, encouraging the Creator to “Just do it!”

To facilitate the shift in perspective and effort from Victim to Creator, the Victim must ask herself, “What do I want? How do I choose to respond? What is my dream that has been denied or thwarted?” By reframing the problem that feeds the Victim perspective into an outcome instead, the Creator can begin to move from hopelessness to possibility and from reacting to choosing how to react.

To facilitate the shift from Rescuer to Coach, the Coach, too, should take responsibility for her self-care and should ask for support. She should ask herself, “How am I seeing the Creator? As a problem to fix or as someone capable and resourceful, whom I can aid in her quest to achieve her goals? What questions will help to clarify an outcome for her, help her to see her current reality, or to generate her baby steps forward?” The Coach should strive to move from fixing the problem to letting go, from telling to asking.

To make the shift from Persecutor to Challenger, the aspiring Challenger should ask himself, “How can I help others grow and develop? What is my intention? What learning or development is the situation calling for?” The Challenger should work to move from control to compassion, from putting down to building up.

We learned in Las Vegas that we should alter our mindsets from intending to “Look Good” to expecting to “Learn.” With a “Looking Good” Intent, the individual is motivated by how he wants to appear to others. He puts himself above others and belittles those around him. He wants to look good, even if at another’s expense. He wants to be right and to be the hero. He wants to be smart and to be the winner. This mindset is based on judgment and control. Folks with this mindset use their energy to protect how they are seen. They only connect if it is useful to their own agendas and/or to fake connections. This makes others wary and reluctant to engage with them or to forgive their errors.

In contrast, those with a “Learning” Intent focus on how they create learning with others. They enhance capacity and capability and maintain integrity with no hidden agenda. They use their energy to create a safe space based on respect and care. They create and sustain connections even when there are obstacles to doing so. They help others to engage or to forgive. They build up others. It is easy to understand why those with this mindset are more liked and trusted.

It is easy to see that, by applying the more optimistic TED* mindset, we can change the damaging cycles in our clients’ lives and create more positive outcomes for their disputes. I learned in Las Vegas that applying TED* in my collaborative cases will help my clients to create the best possible outcomes for themselves. This is why one of my clients told me, somewhat surprisingly, in his final debrief, “I came out of my divorce a better person!”

TED* (*The Empowerment Dynamic) is a registered trademark of Bainbridge Leadership Center, LLC.

Go to an AmazonSmile link for all your Amazon purchases, and 0.5% of every dollar you spend will benefit GCLC!